Hole #10
An environmental area that is situated about 135 yards from the green divides the tenth hole. Only the longest hitters need to worry about laying up as the average golfer can't reach the hazard. The tenth is tree lined on both sides and requires an accurate tee shot. The approach is usually from about 150 to 200 yards out from a downhill lie to an uphill green. The green is guarded by a bunker on the right that catches most errant shots. While the tenth green is one of the flattest on the course, overall this is one of the most difficult par-fours in the region.

Hole #11
The 11th is a tough par 3 that usually plays into the wind. It typically plays between 148 and 211 yards but can play as much as 30 yards longer due to the wind. Add in a tee box at the highest elevation on the golf course, and you have a difficult hole. Large bunkers to the right and left guard the large green. 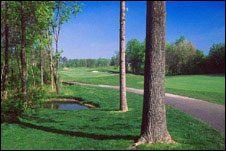 Hole #12
The par 5 12th may rank 2nd hardest hole on the course by the card but many say it's the toughest on the course. Like the 11th, the par 5 12th seems to often plays into the wind. A long, straight tee shot is a must. There is a forced carry off the tee and the further right the ball is hit, the longer the forced carry. Making this hole tougher are the trees guarding the left side. After you negotiate the tee shot, you still have another forced carry for your second shot. There is also a bunker that guards the right side of the landing area. The approach shot to the green is to a blind, elevated two tier green with a false-front that is surrounded by deep grass bunkers. All shots from tee-to-green must be played well to even make a par on this hole.

The 13th is a short par 4 that is actually drivable by long hitters. This hole is a reprieve from the four difficult holes preceding it. However, the tee shot is a blind shot with out of bounds creeping in close on the left side. The conservative golfers will lay up and leave themselves a 100-yard downhill approach shot to the generous, relatively flat green.

Hole #14
The 14th is a very short par three that has a severe downhill elevation change. The 14th plays between 135 and 166 yards. Gauging distance is to key to this approach shot. This is probably our most birdied hole.

Hole #15
The fifteenth is a straight-forward par 4 that is cut through the trees. There is generous fairway in the landing areas for the tee shot, but a miss will be penalizing. There are bunkers on both sides of the fairway. Pinpoint accuracy on the approach shot is a must in order to have an opportunity for birdie on the two-level green.

Hole #16
The sixteenth is a par 4 that is medium in length and blind tee shot. There is a generous landing area but a missed shot left could leave you out of bounds while a missed shot right could leave you blocked by trees. Your approach shot must carry a visually intimidating environmental area that ends about 15 yards short of the front edge of the green, which is guarded by two bunkers.

The 17th is a beautiful risk-reward par 5. Measuring 525 from the back tees it is possible to cut the corner of the dogleg and make it into a two shot hole. However, the fairway of the second hole, along this route, is considered out-of-bounds. On your approach/second shot, there is a lake - which many risk takers will find their ball swimming in. For the more conservative player, #17 is a 3 shot par 5 that is has its dangers but is manageable. 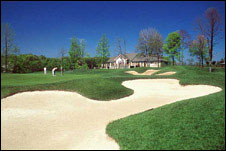 Hole #18
The 18th is a straight away uphill par 4 that is a great finishing hole with the clubhouse directly behind the green. There are bunkers on both sides of the fairway, and three bunkers guard the large two-tier green. Par is an excellent score on this challenging finishing hole.

Become a Timbers at Troy Insider

Get the latest news and specials from The Timbers at Troy.
Don't miss out!